This paper presents the design of a key-value store to achieve Realibality/Availability at massive scale at Amazon. And it has huge impact on Cassandar and lots of nosql databases that have been created during the decade.

Its importance toward NoSQL revolution is unquestionable.

To achieve this level of availability, Dynamo sacrifices consistency under certain failure scenarios.

One of the lessons our organization has learned from operating Amazon’s platform is that the reliability and scalability of a system is dependent on how its application state is managed.

The client should be able to read and write to the data store no matter what happens:

Why Dynamo is designed as key value store?

Many services on Amazon’s platform that only need primary-key access to a data store.

Technique used for scalability and availability

ACID is properties for database transaction.

Experience at Amazon has shown that data stores that provide ACID guarantees tend to have poor availability[5].

Dynamo has weaker consistency for high availability(C in ACID).

Dynamo has no isolation and therefore only allows single key update.

Service should be able to configure Dynamo to achieve tradeoffs among performance, cost efficiency, availability, and durability guarantees.

Amazon is crazy on its SLA due to it is prodiving cloud services. Amazon is not using mean or median of response time, but rather based on the 99.9 th pertenctile of the distrinution.

Strong consistency is hard (The data is made unavailable until it is absolutely certain that it is correct). To achieve it, the data replication algorithms have to do synchronous replca coordination.

Also we have the CAP therom. so you cannot get three of them all together: network paritions resilience, strong consistency and high availability.

Optimistic replication techniques allows you to propagate changes to replaces. So you gets better availability but you could have conflicting changes which have to be detected and resolved.

Dynamo is designed to be eventually consistent - all updates reach to to all replicas eventaully.

Dynamo targets the design space of an “always writeable” data store (i.e., a data store that is highly available for writes). 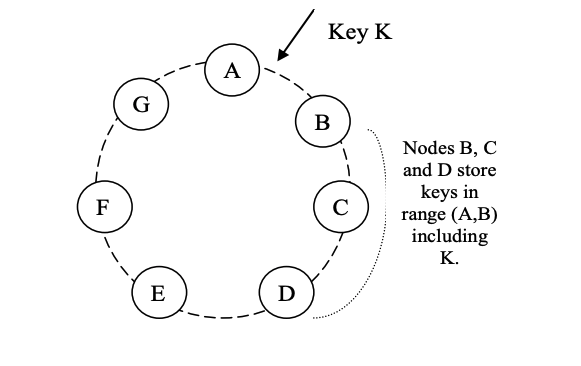 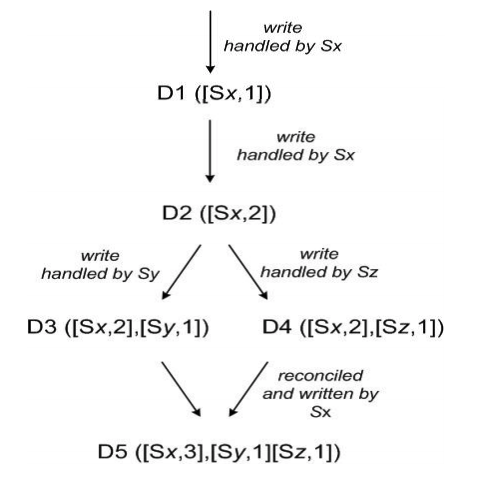 Dynamo provides eventual consistency, which allows for updates to be propagated to all replicas asynchronously.

Put call will return before all replicates apply the update. So a subsequence get call may not have the latest update.

Not all applications suit eventual consistency model. But there is a categoriy of applications in Amazon’s platform can tolerate the inconsistenceis.

If user modified the data of an old version, there will be a divergent versions that will be reconciled later.

A vector clock is effectively a list of (node, counter) pairs. One vector clock is associated with every version of every object. One can determine whether two versions of an object are on parallel branches or have a causal ordering, by examine their vector clocks. If the counters on the first object’s clock are less-than-or-equal to all of the nodes in the second clock, then the first is an ancestor of the second and can be forgotten. Otherwise, the two changes are considered to be in conflict and require reconciliation.

Execution of Get and Put operations

A node handling a read or write operation is known as the coordinator.

You could lose a replica and bring up a brand new one, how to make sure it is sync-ed.

due to the system is sensitive to ring membership changes so adding/deleting ring memnership is an explicity workflow done ny the sysadmin.

Use gossip protocol to make sure each node has the up to date memnership.

the above scheme could temporarily result in a logical partitioned ring. to avoid this need some seed node. Can ne static configuraiton or from a configuration server.

add nodes will take onwnership of keys from other nodes. and vice versa when removing nodes.

doing this due to the need of distributing keys uniformly across storage nodes.

Clients can tune N, R, W to achieve the deseried levels of performance, availability and durability.

In a given time window, a node is considered to be “inbalance”, if the node’s request load deviates from the average load by a value a less than a certain threshold concept of imbalance ratio: fraction of nodes that are “out-of-balance” during this time period

Similar to strategy 2, this strategy divides the hash space into Q equally sized partitions and the placement of partition is decoupled from the partitioning scheme. Moreover, each node is assigned Q/S tokens where S is the number of nodes in the system. When a node leaves the system, its tokens are randomly distributed to the remaining nodes such that these properties are preserved. Similarly, when a node joins the system it “steals” tokens from nodes in the system in a way that preserves these properties. 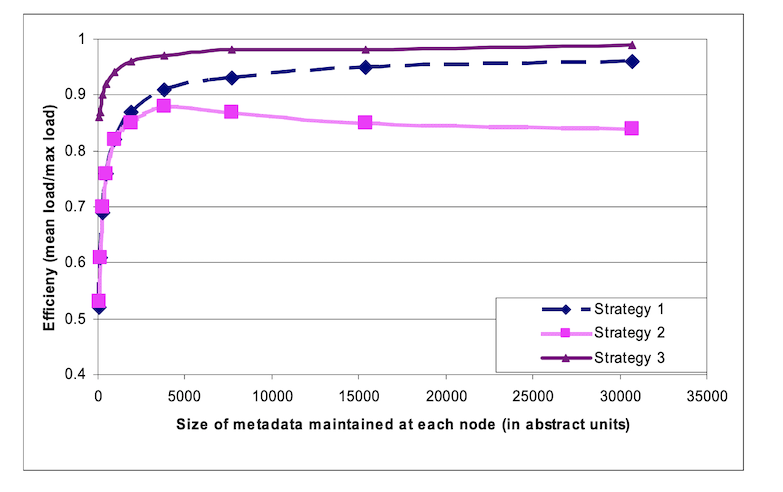