This is the freebook I got from official website of Confluent, written by Ben Stopford. I like his website, there are lots of interesting stuffs.. and this book is also on his website with pdf, epub and mobi.

Trend of Microserves and How Kafka came into the picture

It starts with Amazon, and according to Steve Yegge’s Google Platform Rant post,
the one of the a few things that Amazon has done right than Google.

Then Linkedin, changed its monolithic Java application into 800-1000 services.
One different here is that Linkedin uses a in house built message/replyable log system: Kafka.

HTTP interfaces make lookup simple, but not moving data around.

Replayable logs decouple services from one another, much like a messaging system does, but they also provide a central point of storage that is fault-tolerant and scalable—a shared source of truth that any application can fall back to.

Kafka is a mechanism for programs to exchange information, but its home ground is event-based communication, where events are business facts that have value to more than one service and are worth keeping around.

Chapter 5 Events: A Basis for Collaboration

Commands are actions—requests for some operation to be performed by another service, something that will change the state of the system. Commands execute synchronously and typically indicate completion, although they may also include a result.

Events are both a fact and a notification. They represent something that happened in the real world but include no expectation of any future action. They travel in only one direction and expect no response (sometimes called “fire and forget”), but one may be “synthesized” from a subsequent event.

Queries are a request to look something up. Unlike events or commands, queries are free of side effects; they leave the state of the system unchanged.

Fran Leymann: Loose coupling reduces the number of assumptions two parties make about one another when they exchange information.

Both values are in loose and tight coupling

Sharing always increases the coupling on whatever we decide to share. 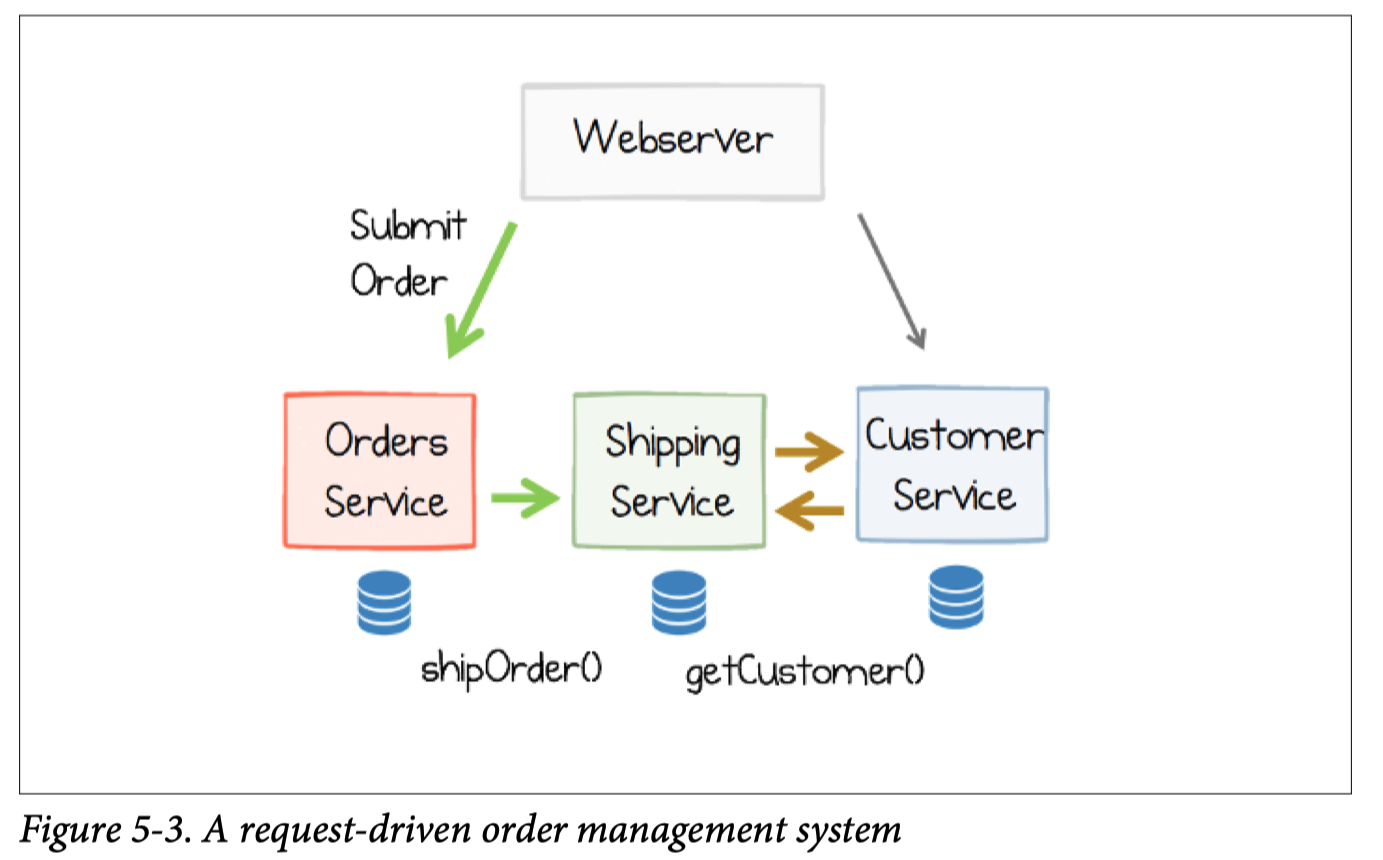 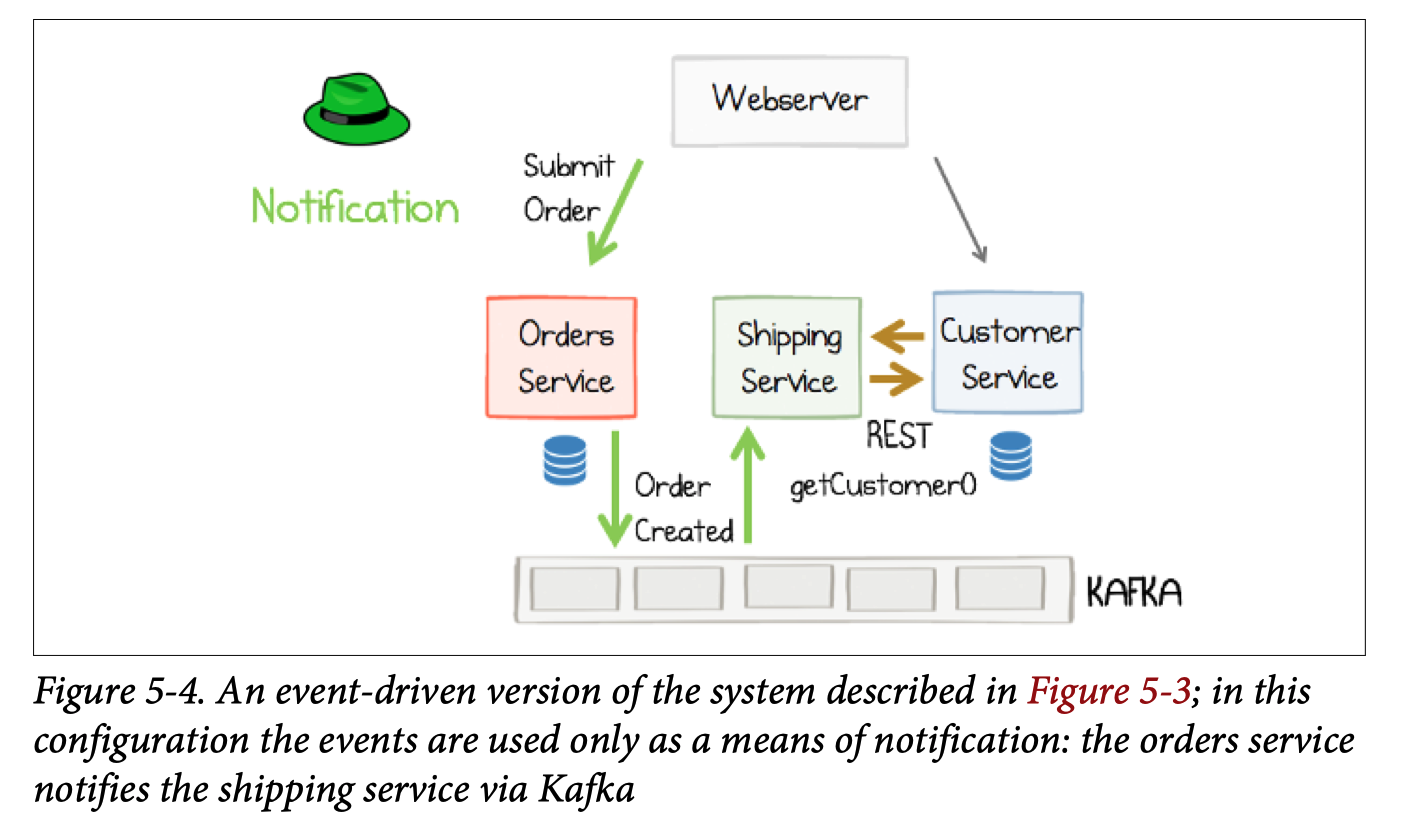 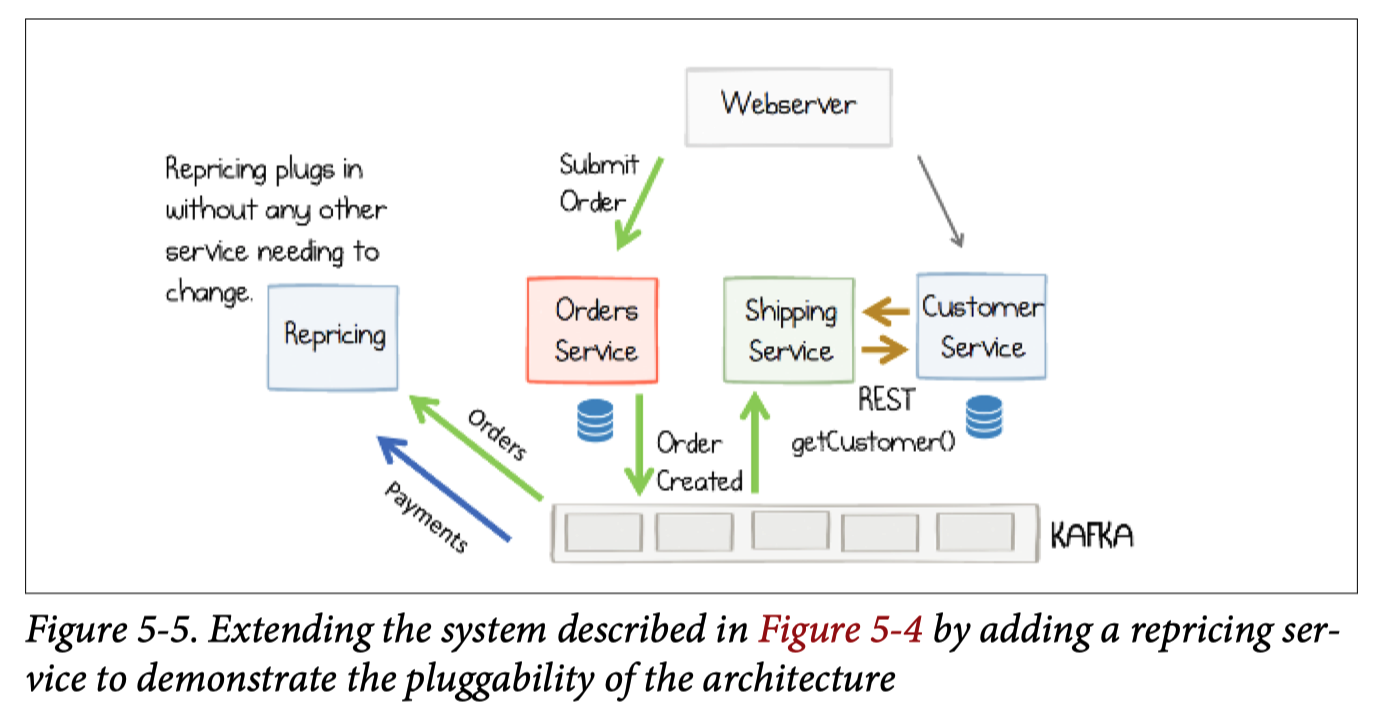 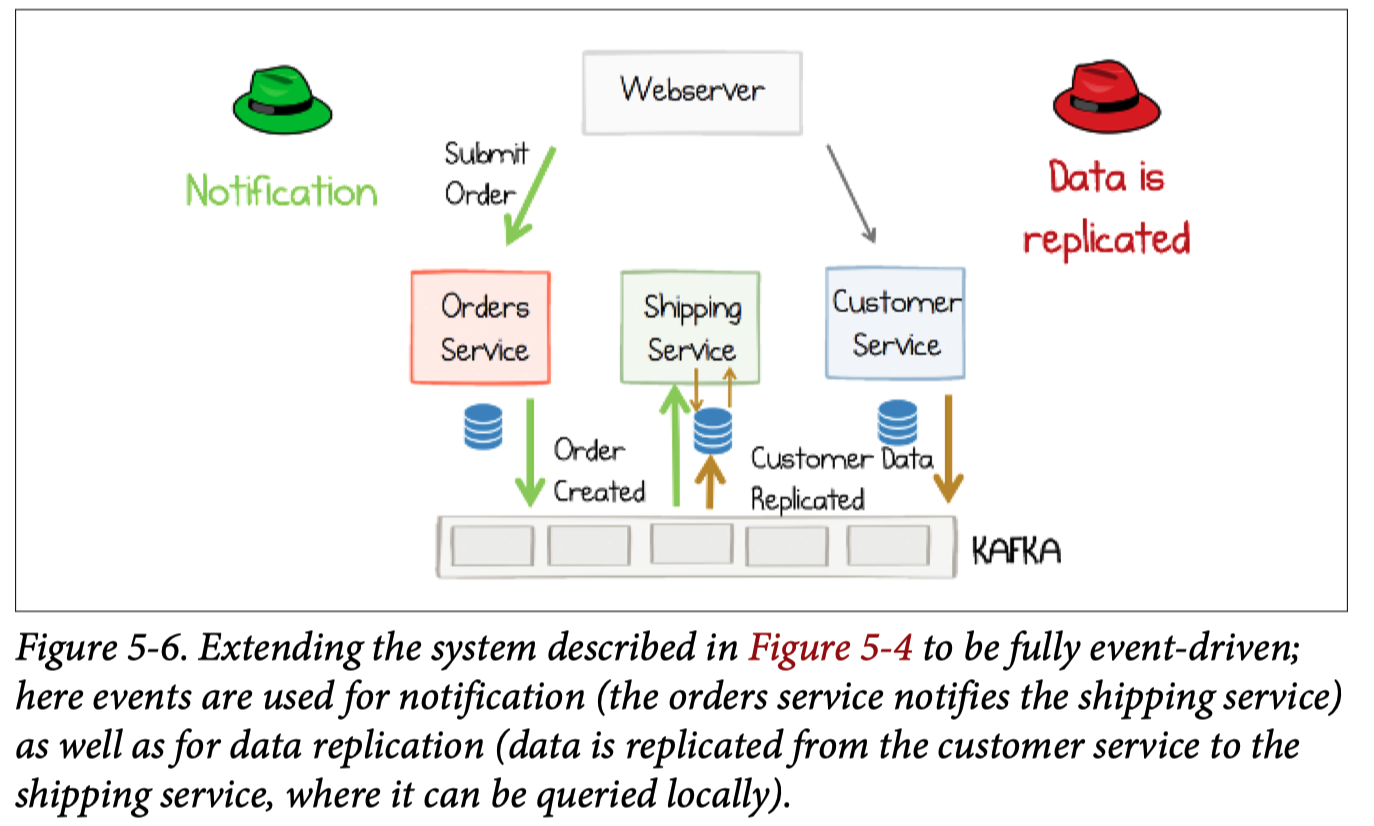 Say we have an email service that listens to an event stream of orders and then sends confirmation emails to users once they complete a purchase.

The streams (payment, order) are buffered until both events arrive, and can be joined together.

Shanhe: The books says this is a sort of stateless. But I am not so sure. This clearly falls into the stateful streaming as usually we will use a state store for this purpose. It is just the state is kinda local. It really depends on the business logic of how you need to process the data.

What if there are more state needs to be looked up and are not in the streams. Then we fallback the previous appraoch, in the stream processor we need to do remote lookup into another service.
In this case, there are futher optimization - preload the whole lookup into the email service, i.e., creating a local lookup table.

One solution is to poll or get notified the change and load lookup from the customer service.
This basically will forfeit the previously mentioned optimiazation, and the system will depend on the worse-case perofmrance and liveness of the customer services.

Another solution is you have to bake the event of customer service into your streams as well.

Event is something that can change the state of the service.

Command is a subset of events that mainly as input to the service. So commands are events from user of the service.

What are the beneifits to store events as log?

Command sourcing is a variant of event sourcing, which applies to events that come into a service, rather than via the events it creates. In short, command sourcing is using log to record user input to the service.

For CQRS please see This
It is a kind of read-write isolation.

Due to read model is updated async, it will run slightly behind the write model.
If a user performs a write, then immediately performs a read, it is possible that the entry they wrote originally has not had time to propagate, so they can’t “read their own writes.”

Materialized View is very close to the query side of CQRS.

A materialized view is a table that contains the results of some predefined query, with the view being updated every time any of the underlying tables change.

Or simply put, precomputed table view. In relational database, it is more like maitaining a table that can be read without any post query computation and serve to user.

there is no “one-size-fits-all” approach to databases

One Write into multiple views.

Chapter 8 Sharing Data and Services Across an Organization.

Encapsulation encourages us to hide data, but data systems have little to do with encapsulation.

Service interfaces inevitably grow over time to the point where they start to look like some form of kooky, homegrown database.

We need to consider Data as a first-class citizen of the architectures we build.

Chapter 9 Event Streams as a Shared Source of Truth

Database Inside Out with Kafka

The idea that a database has a number of core components—a commit log, a query engine, indexes, and caching—and rather than conflating these concerns inside a single black-box technology like a database does, we can split them into separate parts using stream processing tools and these parts can exist in different places, joined together by the log.

Lean data is a simple idea: rather than collecting and curating large datasets, applications carefully select small, lean ones—just the data they need at a point in time—which are pushed from a central event store into caches, or stores they control. The resulting lightweight views are propped up by operational processes that make rederiving those views practical.

Consider using event streams as the source of truth

If message remembers, databases don’t have to. You can re-generate a databse or event-sourced view completely from the log.
Why?

Take only the data you need, nothing more

Drawback of lean data is if you need more data, need to go back to the log and drop the view and build from scratch.

Handle the Impracticalities of Data Movement

How to speedup the rebuiling of the event-sourced views, with larger datasets.

If you need to rebuild terabyte-sized datasets in a single instance of a highly indexed, disk-resident database, this load time could well be prohibitively long.

Because of this lead time, when releasing new software, developers typically regenerate views in advance (or in parallel), with the switch from old view to new view happening when the view is fully caught up.

Shanhe: I think there is another thing not taken in considerations: what if the views have dependencies. This will definitely increate the lead time. I have been facing this in my work and I don’t have a good solution.

If two services process the same event stream, they will process them at different rates, so one might lag behind the other. If a business operation consults both services for any reason, this could lead to an inconsistency.

Shanhe: This is more like a design issue to me. Given this is determiend by business logic (e.g., one services need view from aother service). Adding serialization is the only.

If different services make changes to the same entity in the same event stream, if that data is later coalesced—say in a database—some changes might be lost.

If we design the system to execute serially, this won’t happen, but if we allow concurrent execution it can.

Conflating writes into a single service makes it easier to manage consistency efficiently.

Chpater 12 Transactions, but Not as We Know Them.

If you make a call to a service and it’s not running for whatever reason, you retry, and eventually the call will complete. One issue with this is that retries can result in duplicate processing, and this can cause very real problems (e.g. payments).

Many systems simply push data to a database, which will automatically deduplicate based on the primary key. Such processes are naturally idempotent.

Exactly Once Is Both Idempotence and Atomic Commit

Begin markers then commit or abort marker.
To make this work, when a consumer sees a Begin marker it starts buffering internally. Messages are held up until the Commit marker arrives.

There are a fair few options available for schema management: Protobuf and JSON Schema are both popular, but most projects in the Kafka space use Avro. For central schema management and verification, Confluent has an open source Schema Registry that provides a central repository for Avro schemas.

Using Schemas to Manage the Evolution of Data in Time

Don’t use Java serialization or any non-evolvable format across services that change independently.

Shanhe: I recently run across protobuf over Kafka and found a few tools from Uber quite useful. They are prototool and buf.

What if there are breaking changes.

Some implementers choose to create a type of dead letter queue of their own in a separate topic. If a consumer cannot read a message for whatever reason, it is placed on this error queue so processing can continue. Later the error queue can be reprocessed.

the simplest way to remove messages from Kafka is to simply let them expire.

If you’re using CDC this will just work: the delete will be picked up by the source connector, propagated through Kafka, and deleted in the sinks. If you’re not using a CDC-enabled connector, you’ll need some custom mechanism for managing deletes.