The paper uses Google’s Zeitgest pipeline, which serves the hot treand topics, as an example to get idea of the motivation and requiremetns for MillWheel.

THe system is implemented in an approach that

Storage requires both short- and long-term.
Spike data are transient, that only last a few second.
But the model can be used and gets constantly updates for months.

Watermark concept is very import for understanding stream processing.
It is watermark in term of record time.
A Low watermark means all events happen before this timestamps are finalized.
If you compare low watermark to the current timestamp. It kinds of defines a duration for how long you will wait for late events.
Watermark means a final answer, and discard any answer after the final answer.

A low watermark for each processing stage, which indicates that all data up to a given timestamp has been received. The low watermark tracks all pending events in the distributed system.

This can help for differentiating 1) queries are delayed, 2) no quries. 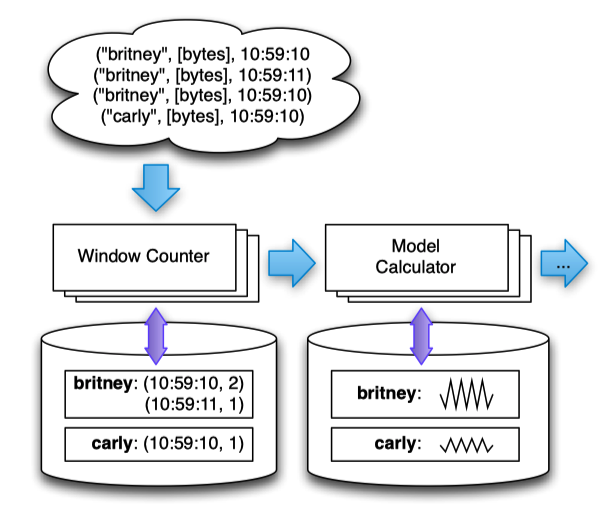 inputs and outputs in MillWheel are represented by (key, value, timestamp) triples. While the key is a metadata ﬁeld with semantic meaning in the system, the value can be an arbitrary byte string, corresponding to the entire record.

All internal updates within the MillWheel framework resulting from record processing are atomically checkpointed per-key and records are delivered exactly once. This guarantee does not extend to external systems

Keys are the primary abstraction for aggregation and comparison between different records in MillWheel.

Computation code is run in the context of a speciﬁc key and is only granted access to state for that speciﬁc key.

Per-key processing is serialized over time only one record can be procesed for a given key at once. Multiple keys can run in parallel.

The consumer speciﬁes a key extraction function, which assigns a key to the record.

Multiple computations can extract different keys from the same stream. 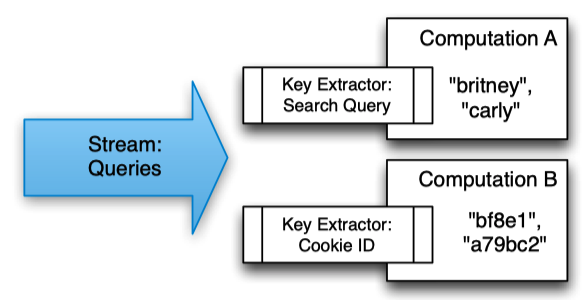 Streams are the delivery mechanism between different computations in MillWheel. Streams are uniquely identiﬁed by their names, with no other qualiﬁcations – any computation can subscribe to any stream, and can produce records (productions) to any stream.

In its most basic form, persistent state in MillWheel is an opaque byte string that is managed on a per-key basis.

The definition low watermark of A to be

If there is no input streams, the low watermakr = oldest work values. 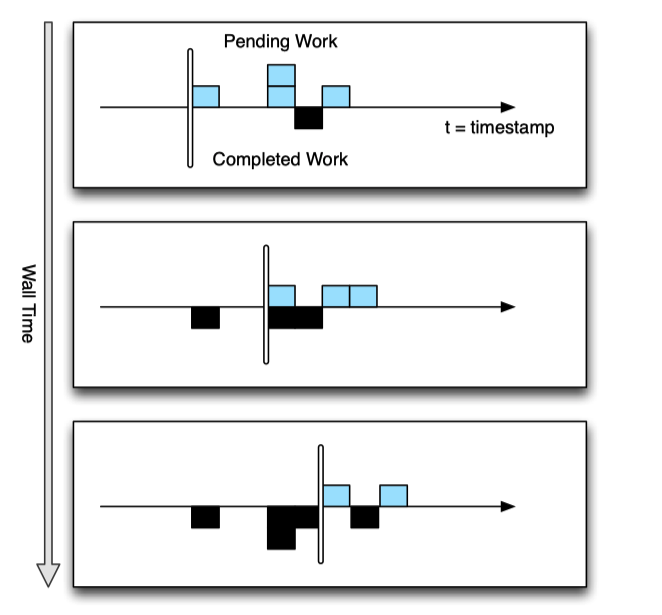 The low watermark advances as reacords are processed by the system.

Data are not necessarily processed in-order, but the low watermark give you the idea of what are still pending in the system.

Shanhe: If you are faimilar with Kafka Streams, this is the punctuation.

Timers are hooks trigger at a speicial wall time or low watermark.

When to use wall time, or low watermark time, is dependent on the applications.

The timers are journaled in persistent state, and can survive process restarts and machine failures. 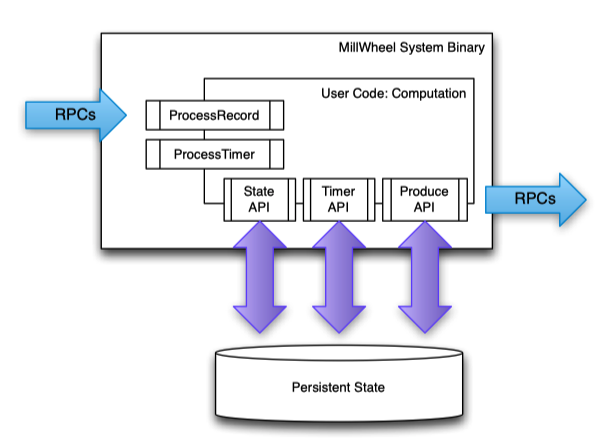 Injector bring external data into the system. It decides the init (seeds) low watermark for the rest of the pipeline. Injector can be distributed, then the low watermark needs to be aggregated.

If the injector violates the lower watermark semantics, and sends a later record, user application code can choose how to handle it.

For example, if the injector is loading files, it can use the creation time of the file.

Upon receiing one record for a computation,

In order for at-least-once (prerequisite for exactly-once), deliveries are retried until they are ACKed.
Retry can happen when there is network failure or machine failure.
So we could have duplicate records (e.g., reciever crashed before sending ACK, but the record is persisted, producer didnt get ACk, will retry which results in duplicate records).

The system assigns unique IDs to all records at production time. We identify duplicate records by including this unique ID for the record in the same atomic write as the state modiﬁcation.

This is done by a bloom filter in memory. In case of filter misss, will read the backing store to determine if it is duplicate.

To use aggreates counts as an example.

Without checkpointing, the computation could produce a a window count downstream, but crashed before saving this state. When the comptuation came back, it can receive a another record, and produce the same aggregate, creating a record that was bit-wise distinct from its predecessor but corresponded to the same logical window.

According to the paper, this needs complex logics to do it at downstream consumer. With strong productions, the user application logic can remain idempotent.

The implementation is via a storage system like Bigtable, making checkpoints mimic the behaivor of a log.
When a process restarts, the checkpoints are scanned into memory and replayed. Checkpoint data is deleted once these productions are successful.

Shanhe: Kafka Streams has the similar design, that use a internal kafka topics to store the state change events, and processor and its state can recover from it.

Depending on the semantic needs of an application, strong productions and/or exactly-once can be disabled by the user at their discretion.

Compared with Strong productions, once you persist the states, you dont have to worry anyting.
Now, the up stream waits for the ACKs from the downstreams. Give the machine can fail, this can increase the end-to-end latency for traggler.

We ameliorate this by checkpointing a small percentage of straggler pending productions, allowing those stages to ACK their senders. By selectively checkpointing in this way, we can both improve end-to-end latency and reduce overall resource consumption. 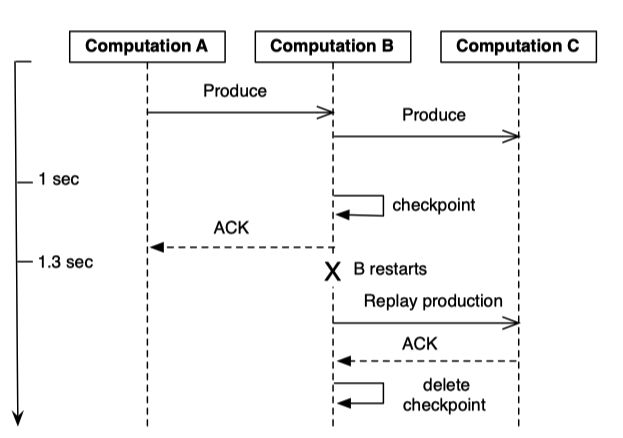 hard state (in bbacking store) and soft state (in memory)

To avoid incosistencies in persisted state, per-key updates are wrapped into a single atomic operations.

As work may shift between machines (due to load balancing, failures, or other reasons) a major threat to our data consistency is the possibility of zombie writers and network remnants issuing stale writes to our backing store

attach sequencer token to each write, the backstore will check before commit the write.

Make use of single writer for consistency of soft state, lead to a always consistent soft state.

Our use of always-consistent soft state allows us to minimize the number of occasions when we must scan these checkpoints to speciﬁc cases – machine failures or load-balancing events. When we do perform scans, these can often be asynchronous, allowing the computation to continue processing input records while the scan progresses.

Transaction cannot guarantee. For example if a remnant write from another process could alter the persisted timer state after said cache was built, the cache would be inconsistent. Same situation can occur with the checkpointed production.

Load balancing is handled by a replicated master, divides each computation into a set of owned lexicographic key intervals, then keys are assigned to a set of machines. Intervals can be moved, splitted, merged. Each interval is assigned to a unique sequencer.

Persistent state, it relies on Bigtable/Spanner. Imters, pending productions, and persistent state for a given key are all stored on the same row.

A globally available sub-system. It is implemented a a central authoroity. which tracks all low watermark values in the system and journals them to persistent state, preventing the reporting of erroneous values in cases of process failure.

To maintain consistency at the central authority, we attach sequencers to all low watermark updates.